I know I have already posted full reviews of Soulless and Changeless, but for the rest of the series I decided to combine all the reviews into one post! I loved this series and read all 5 books in 8 days!  I have a couple random books I want to read next but I will be picking up the spin-off series soon! 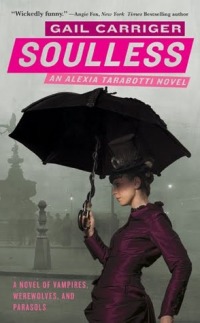 I was given a beautiful illustrated and signed copy of Soulless by the amazing Mary @ Sophril Reads ❤ Thank you Mary! You were right, I loved it!

The cover tagline sums it up perfectly “A Novel of Vampires, Werewolves, and Parasols” It has a little bit of everything I love in a book! Enemies to lovers, Hot Scottish Alpha Male, Strong Opinionated Female, Action, Adventure, Romance! No wonder Mary thought I would love it, it has it all ❤

The only thing that bugged me in the book was that he is immortal and she is not, so how is that going to work in the long term? I’m glad there wasn’t a whole big debacle on the morals of immortality or whatever, but I would have liked to know how it is going to work! I want them to grow old together! Also what was with the octopuses?!?!

I didn’t like this one as much as the first one, but I still really liked it! Alexia and Conall are amazing. I love their dynamics. They fight and bicker constantly but they always have each other’s back. I love that Alexia is every bit as much as an alpha as Conall and I love that she has found a place where she is respected for that!

I didn’t like the lack of communication between Alexia and Conall. There were a lot of issues that could have been avoided if they just took the time to talk every once in a while! It wasn’t even like they were purposely not talking, it was just that they were too busy or forgot or got distracted by other things! It was kind of annoying how often it happened.

But overall the story was good! I liked the plot. It got a little slow for a while, but the rest was action packed and exciting! There were a lot of different plot points and different issues, but they came together nicely in the end! There was a little bit of a cliffhanger, but not so much that it angered me! It was just enough that I need to start the next the next book immediately! 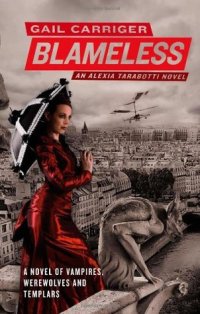 This might be my favorite book so far! Even though I am still completely pissed at Conall! He is a big dummy and I don’t know if I can forgive him for that, but Lyall and Alexia are awesome and really shine in this book!

There also weren’t as many unanswered questions in this book as in the other two.  Aside from the obvious big one (which I was totally expecting to be left open) there weren’t a lot of little clues and hints left hanging, which was nice.

I loved the new characters introduced as well as the old characters that made appearances.  I now want to know more about Ivy and I am sure she will show up more in the next two books!

Finally, I really loved the humor in this book.  While there was humor in the other two books, I felt it came through really well in this one and I laughed out loud more than once!

This one was my least favorite so far.  The middle of the book was slow and the climax action kind of came out of no where.  Plus I wanted the baby to be born early in the story! I want to know about her!

And I want to know more about the baby!!

Also, I don’t know why but I thought this exchange was hilarious and might be the best lines in the whole series:

“My Lord, have you ever delivered a baby before?”

The earl paled as much as was possible, which was a good deal more than normal given he was holding on to his wife’s hand. “I delivered a litter of kittens once.”

The Frenchwoman nodded. “Not quite the same thing.”

This was a great conclusion to the series.  All the loose ends and questions I complained about in the other books were answered.  Everything was tied up and I appreciate that a lot. (I hate when things are left open!)

I loved little Prudence and I thought Gail Carriger did a great job of capturing the essence of a two year old! The level of speech was spot on! (My niece will be 2 in a couple of months so I have a fairly good reference point) And I loved Biffy’s side of the story! I hope one of the spin-off series has more of him and his lover ❤

Overall I thought Timeless was the perfect ending to a great series!!

Have you read the Parasol Protectorate Series? Did you love it? Lets chat!