Make sure you check out the first three posts in this series:

This is the fourth and final post: Our Discussion

Disclaimer: All Amazon Links are affiliate links. If you purchase any of these books through one of my links I will get a small commission! All the thoughts/opinions in this post are mine and in no way influenced by Amazon.

It was impossible to discuss the book without spoilers, so beware! 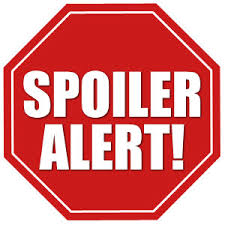 Here is our discussion:

Brittany – First thoughts? Phil’s review is sooo much better than mine with respect to its actually being a review. Haha mine is more of a ramble. But mine has gifs so I would say we are pretty equal 😉 Phil, you mentioned that the reader may be a little lost if they aren’t into this culture. I don’t know if I agree with that. I am into the culture, but I am not into Buffy (yet) and I didn’t have any trouble following along.

Phil– I loved your review! As always your personality really shown through and yeah I totally can’t handle the creativity of gif. When I mentioned readers being lost if they aren’t into the culture it was less about the plot and more about the jokes. Most of the jokes that I found funny were deep cut references that will feel like an inside joke that you’re not a part of if you haven’t read the source material. In your review you mentioned that nothing felt rushed but the conflict with Braidbeard losing his pass really felt rushed to me. You didn’t think so?

Brittany – Aww thanks 🙂 And that makes sense! There is a very good chance that I completely missed some jokes! As for the conflict with Braidbeard, it wasn’t about him losing his pass, it was about Julie realizing and accepting him as a friend and about her stepping up to help someone. It starts all the way back at the scene where they are bidding for the Glory figure. Braidbeard jumped in without hesitation. He could tell it was important to Julie so he helped, no questions asked. They didn’t win but it was huge that he tried to help. But then, when he got in trouble and needed Julie, she didn’t want to help him. It showed how selfish she could be. It fueled her fight with Jack. The issue was never supposed to be about Braidbeard. It was about Julie and it gave us a chance to see her grow.

Phil – I agree that it was meant to be about her personal growth but it just felt too anti climatic how easily she was able to get the pass. But you’re right it does start earlier when they were bidding on the figure I actually really liked when he decided to help her out. What did you think of the hand drawn pictures of the characters they added? I kind of wish they weren’t there because I like having my own mental image o f the characters.

Brittany – Um, I had forgotten about those. Where there only 2? I don’t remember. I was reading the kindle version so they might have been different but I didn’t really look at them. I just sort of skipped over them. I had my mental images and the pictures didn’t affect them. Did you read through the extras at the end of the book? I thought they were really cool!

Phil – Yes! I really loved the Q&A part especially about women in geekdom today. Do you ever feel like because you’re a girl some people assume you’re not really Into the nerdy stuff you’re into?

Brittany – Luckily no, I haven’t run into that. I actually get it more in my sports circles than in my nerdy circles. I know “geek shaming” exists and I have seen countless examples online of men accusing girls of being “fake geeks” but have not had to deal with it myself. I would make an easy target too haha. l love geek stuff but am awful with trivia and remembering details. I would fail miserably if someone tried to quiz me. I read a ton and I remember the feelings I get reading things, not so much the things themselves. I did notice that in One Con Glory it was never really brought up as an issue. Julie was accepted. It was sort of alluded to when Kirstie wanted to be friends because they were females in a male dominated world, but that was it. Recently I read “Don’t Cosplay with My Heart” and it was a big issue in that book. Now, stop getting off topic!! Lets wrap this up. What are your final thoughts? You told me you loved the book when you finished it but then you only gave it a 3.5? A 3.5 is just “meh” to me. I still think it was a 5!

Phil – I’m a bit harsher when it comes to my scores! I loved it for what it was, a fun, quick, and easy read. I took points off for that feeling that things were rushed and it didn’t leave me thinking about it after I was done. I could recommend it to some people but not everyone.

Brittany – Makes sense! This was fun 🙂 we should do it again some time!

Phil – I totally agree it was a ton of fun! It’s great to get someone else’s perspective especially when it’s pretty different from yours!

I really enjoyed doing this! I think I need to join a book club haha.  Are you in a book club? What do you enjoy most about it?  Would you be interested in participating in a group review like this when we do it again?  Let me know!